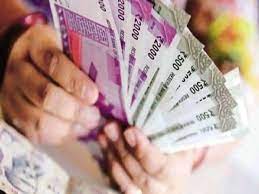 Dearness Relief (DR) to central government pensioners, family pensioners is increased by 3 percent to 34 percent, with effect from January 1, 2022, according to the Department of Pension & Pensioners’ Welfare (DoPPW).

In a tweet, the department stated that family pensioners will now be entitled to the basic pension and family pension effective January 1, 2022.

Dearness Relief is available on your original basic pension, before you commute.

The union Cabinet approved last week the release of Dearness Allowance to central government workers and Dearness Relief for pensioners. This represents an increase of 3 per cent over the current rate of 31 percent on the basic pay.

According to the office memorandum dated April 5, 2022, “The undersigned is directed to refer to this Department’s OM No. 42/7/2021 – P&PW(D) dated 27. 10.2021 to discuss the above mentioned subject and to say that the President is happy to determine that Dearness Relief, which is available to Central Government pensioners/family-pensioners, be increased from the current rate of 31% up to 34% effective 01.01.2022.

Thèse rates of DR will be applicable to the following categories:-

Family Pensioners and Civilian Central Government Pensioners/Family pensioners, including Central Govt. Intake pensioners in PSU/Autonomous Bodies for whom orders have been issued by this Department’s OM Number. 4/34/2002-P&PW(D)Vol.II dated 23.06.201 7 for restoration of full pension after expiry of commutation period of 15 years.

• Pensioners who are in receipt of provisional pension

• The Burma Civilian pensioners/family pensioners and pensioners/families of displaced Government Pensioners from Burma/ Pakistan, in respect of whom orders have been issued vide this Department’s OM No. 23/3/2008-P&PW(B) dated 1 1.09.2017.

The disbursing authorities will disburse arrears of DR from January and February as well as July, August and August in April and October respectively.

In March, it was announced that the dearness allowance component of central government employees’ salaries has been hiked. The notification states that the DA has increased by 3% to 34%, from 31% before. This increase will take effect January 1, 2022.

Bebak Post is one of the fastest growing news websites in India. Bebak Post's content is distributed across all major platforms and social media. Bebak Post's unique "real-time" approach to delivering news allows it to outpace traditional media outlets with breaking news, analysis, and opinions. Bebak Post has a strong focus on investigations and reporting both locally and internationally.